The bipartisan proposal requires state occupational licensure boards to apply a fair and consistent approach when considering whether to deny, suspend, or revoke a job license on the basis of a criminal conviction. Licensure boards will be limited to considering only convictions directly related to the occupation and must consider remediating factors. The legislation also provides individuals with a preliminary ruling from licensure boards to determine whether their criminal history poses a barrier to licensure prior to pursuing a training program. 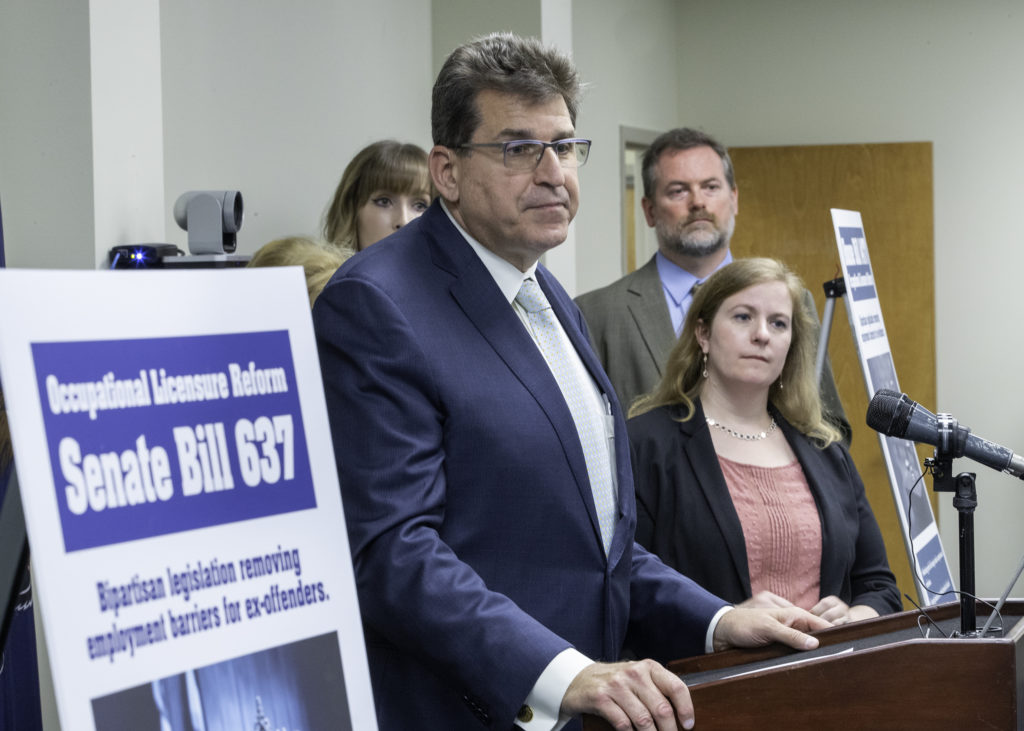 “More than 1 in 5 jobs require a government license and too often, qualified applicants are denied the right to work because of an old or irrelevant criminal record,” Senator DiSanto said. “By providing pathways to work we reduce recidivism and promote economic opportunity at a time our commonwealth is in need of a skilled workforce.”

Senator Schwank added, “Hurting someone’s efforts to become a responsible and successful member of the community after they have paid for their crime is never part of a court’s sentence. It benefits no one, and hurts the community along with the individual. We want to add balance and predictability to the occupational license process, and enable returning offenders to actually plan and work toward worthwhile goals when they come back to our communities.”

Rep Delozier said, “We need consistency in how these boards are evaluating criminal records when issuing occupational licenses. People should not be denied opportunities to re-enter the workforce unless their conviction is directly related to the profession.”

“We simply can’t continue to judge people by their worst day and hold them back from enriching their lives and the lives of others due to mistakes made in the past that have no impact on someone’s ability to do a job,” said Representative Harris. “This is another step forward in helping those with criminal records re-enter the work force and strengthen our economy and I’m incredibly appreciative to have this discussion today with bipartisan support from my colleagues.”

Brandon Flood, Legal Redress Chair for the Greater Harrisburg NAACP said, “The time is long overdue for our General Assembly to critically examine how the collateral consequences of a criminal conviction adversely affects millions of Pennsylvanians and negatively impacts the growth and sustainability of our Commonwealth’s workforce. As such, the Greater Harrisburg NAACP applauds Senator DiSanto’s leadership in removing subjectivity from our state’s licensing process.”

PA Chamber of Business and Industry President Gene Barr said, “The growing skills gap in the Commonwealth is a top concern of the state’s business community. While there is no silver bullet to solving this problem, one important area of focus is criminal justice reform and removing barriers to help individuals reentering communities more easily obtain and retain employment. Reforming Pennsylvania’s laws related to occupational licenses is an important part of this effort.”

“Pennsylvania should give people who want to work a path to independence by reforming occupational licensing laws that unjustly shut them out of their chance to earn a decent living,” said Steve Bloom, Vice President of the Commonwealth Foundation.

Lauren Krisai, Senior Policy Analyst for Justice Action Network said, “We’re encouraged to see Pennsylvania lawmakers continue their work toward bipartisanship with the introduction of occupational licensing reform legislation. This bill will reduce barriers to employment for Pennsylvanians with a criminal record, increasing opportunities for those who have earned a second chance. We look forward to working with Senators DiSanto, Schwank and Representatives Harris and Delozier to pass this critical reform this year.”

The lawmakers are optimistic about the General Assembly taking up the legislation in June as there is considerable bipartisan support as well as a diverse coalition of business and community stakeholders backing the proposal.